The Tratturi represent the great "green highways" of the past.

The Tratturi, the great “green highways” of the past, have survived in part right up to the present day, and they indicate the paths the shepherds moved through with their animals in Autumn towards the warmer plains of Puglia, and in Spring towards the cooler climate of the mountains of Abruzzo and Molise, thus taking advantage of the pastures in the two territories. Each track therefore was the result of the herds’ trampling the ground, and their width measured 111 meters. In total this huge road network included 14 Tratturi, 70 Tratturelli (little tracks), 14 Bracci (branches) and 9 resting places. The Tratturelli and the Bracci were tratturi (tracks) of a smaller size, and served as links between the main arteries.

The most important were the Celano-Foggia, of about 200 kilometers, the Castel di Sangro – Lucera, of 127 kilometers, and the Pescasseroli – Candela, of 211 kilometers.

Ultimately these conducting lines followed and exploited the natural topography of the Molise territory; they became important means of communication, and it is hardly surprising that many of the principal Molise municipalities, for example Campobasso, Bojano and Isernia, grew up right along the tracks. In addition, there were real “service stations” for people (and animals) just like we have along our modern communication routes; factories, taverns and churches proliferated along the edges, guaranteeing the shepherds with a supply of all the various necessities.

In 1997 the Tratturi Park was set up in the Molise Region to preserve its natural, historical and cultural heritage.
Near Pescolanciano, in the Province of Isernia, at the northern exit from the town, you can take the Castel di Sangro-Lucera tratturo in all its majesty, still intact with its width of 111.6 meters. A spectacle that is unique in the world, close to hand, where you immerse yourself for a moment in the history of Molise and of Transhumance.
One of the recommended itineraries is the one that leads from the municipality of Pescolanciano to Carovilli; it covers about 8 kilometers, passing along the Castel Di Sangro-Lucera trail and joining the smaller trail at San Domenico, connecting with the Celano-Foggia trail. In the first part the trail is still intact and clearly visible; in the intermediate section vegetation has overtaken the original path; the little church of San Domenico represented a resting place for the shepherds during the transhumance.

The Celano-Foggia Tratturo is the longest trail that crosses Molise. For over 80 kilometers it unfolds through the collection of 16 villages in the provinces of Isernia and Campobasso. Following the green slopes, from Abruzzo to Puglia, you cross S. Pietro Avellana, Vastogirardi, Carovilli, Agnone, Pietrabbondante, Pescolanciano, Civitanova del Sannio, Bagnoli del Trigno, Salcito, Trivento, Lucito, Morrone del Sannio, Ripabottoni, S. Elia a Pianisi, Bonefro and San Giuliano di Puglia, for a journey in which the trail reveals some of the most typical aspects, such as the wide valleys or the crossings of woods, the MAB (Man of the Biosphere) forests and the Trigno and Biferno rivers.

As for the Tratturelli (small trails), in the Molise area, the Castel del Giudice-Sprondasino-Pescolanciano should be singled out, with its 40 kilometer length.
The Castel del Giudice – Sprondasino Tratturello connects two important tracks that cross and involve the territory of Alto Molise: the Ateleta-fiume Biferno, in the countryside of Castel del Giudice, and the Celano-Foggia, in the countryside of Civitanova del Sannio.
The development of the tratturello, between 18 and 36 meters wide, is entirely passable for about 30 kilometers. The starting point is near the “Vallone Molinara” of Castel del Giudice at an altitude of 800m a.s.l.; following in parallel the “Vallone” runs along the source of the “acqua zolfa” and arrives, after a steep ascent, in Capracotta (altitude 1400m a.s.l.). Skirting the base of Monte Campo it reaches the slopes of Monte San Nicola and from there, after intercepting the “Fonte del Duca” and the “Fonte del Romita” (areas of historical-archeological Italico-Samnite interest in which the famous Oscan Tablet is found) descends towards the countryside of Agnone, encountering the farms of Ciccotondo and Tedeschi. It descends again down to Vallon del Cerro, crossing at an altitude of 650m to rise up to 800 meters at Agnone. The tratturello leaves the Alto Molise capital and heads towards Villa Canale after skirting the megalithic-Italic walls in the area of San Lorenzo. From the “Fonte Minaldo” it then enters the countryside of Poggio Sannita from its main gate, the municipality of “Fascianella”, at an altitude of 735m. It winds for over 10 kilometers along the ridge that goes from Colle Sant’Elia to Colle del Sorbo, then downhill to the valley of the Mucchi district until it reaches the Verrino stream. It then proceeds to the Trigno River at an altitude of 350m a.s.l., and finally ends its journey by grafting on to the Regio Tratturo Celano-Foggia, in the “Terra Vecchia” locality of Bagnoli del Trigno.
The main characteristic of the Castel del Giudice-Sprondasino Tratturello on the section involving the Poggese countryside is the high and dramatic panoramic view that is highlighted as you follow it – to the east from the Trigno valley up to Trivento – to the west from the Verrino valley which goes up to Capracotta. 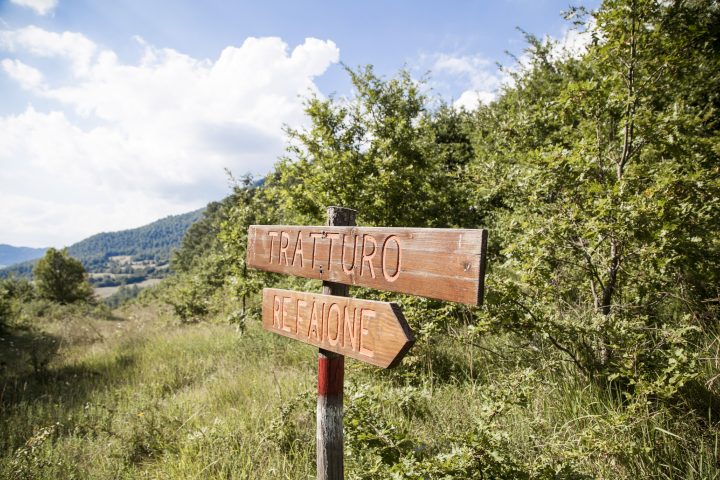 The ancient tradition of cheese

Places of sport and nature

The ideal way to experience the Alto Molise

The craftsmanship at Agnone

A path between art and religion

A walk in the historic center

The way of the Saints

A curious and mysterious route where faith, popular tradition and superstition coincide.

Sport in Pescopennataro (climbing and trekking)

A town with imposing limestone walls where it is possible to practice the sport of climbing.

Discovering the nature walks and skiing in Capracotta