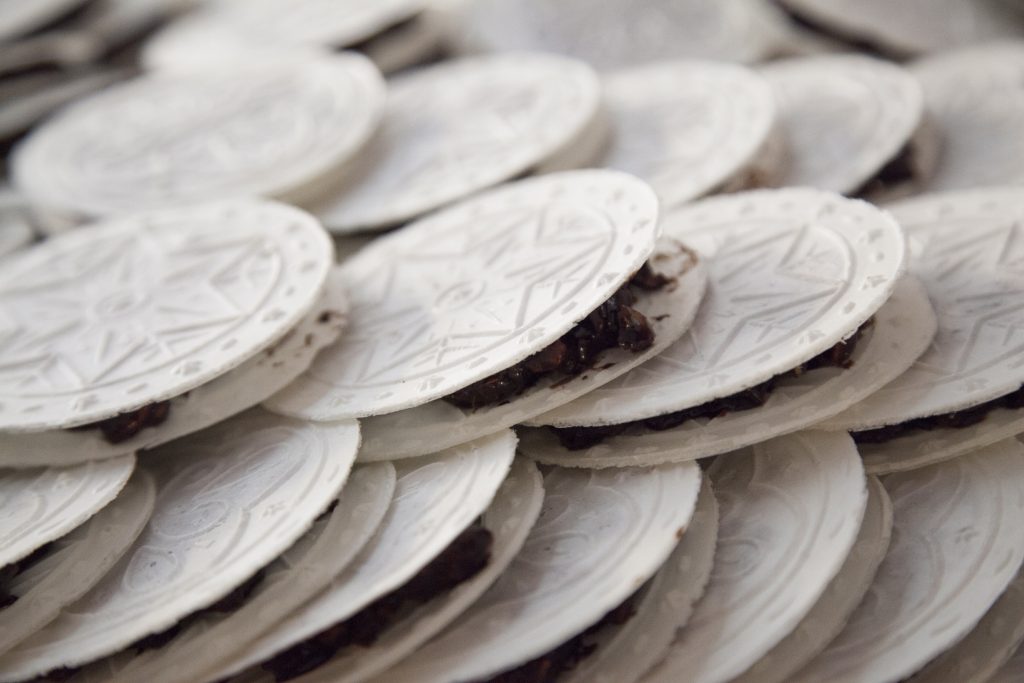 It’s the Christmas cake! It is the most famous dessert of Agnone!

This is a Christmas sweet! And the dessert that is Agnonese par excellence!
It consists of two white wafers filled with walnuts, and almonds that have been peeled and toasted, all coarsely chopped, then honey, sugar, dark chocolate and bitter cocoa, flavors added
WAFERS: (cups) :
You prepare a loose mixture of flour, water and a teaspoon of oil. Using a suitable iron pan that has been heated to a high temperature, you pour on a spoonful of batter, which produces a flaky wafer.
FILLING (mbràisa)
In a saucepan (possibly a double-boiler), boil the honey and add one or two spoonfuls of sugar and let it melt and blend in. Then add the almonds and walnuts and stir frequently. When the nuts are crunchy to the teeth, add dark chocolate, bitter almonds and flavors (a choice of : cinnamon, a teaspoon of coffee powder, tangerine peel cut into tiny pieces), stirring constantly.
When the mixture is still warm, spread it on a wafer with a fork and cover with another wafer. A small weight placed on the filled wafer will avoid the heat changing the ostia.

But here, in detail, are the ingredients needed to make 100 wafers:
500 gr. superfine flour
¾ liters water
1 tablespoon of olive oil

CURIOSITY
It seems that it was the Agnone Poor Clare nuns, most of whom came from wealthy families, who invented this sweet. Perhaps it was originally made with cooked must (derived from wine-making) instead of chocolate. The must would have been mixed with the honey using the same method as that described above.